When I was building my first rig in college, I was most concerned with looks.  I cringe thinking about stupid shortcuts and things overlooked in getting the aesthetics up to snuff, but c’est la vie.  But we all know – either pay up front in preparation, or you’ll pay down the road when it mattered most. 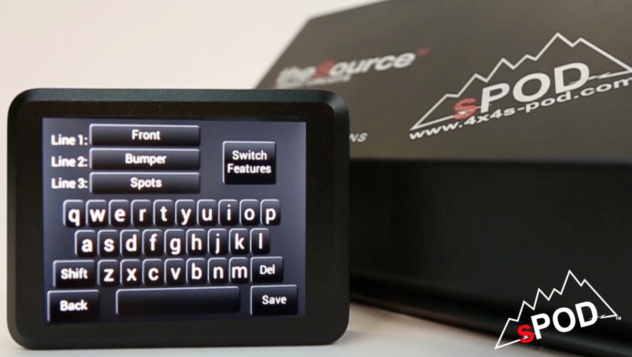 Nearly a decade later and I’m (slightly) wiser for the wear.  And when the plans came together and included lots of lighting, dual batteries, onboard water, and other accessories, the first issue for

me was wiring and management.  Not only the safe and proper powering of everything, but figuring out how to wire it all cleanly as well.

Take a typical wiring harness – for example our IPF 900XLS offroad lights – and break it down.  You’ve got positive, ground, inline fuses, switch wiring, relays.  It’s relatively straightforward, but that doesn’t stop it from being a mess.  Combine 8 of those and you’ve got a bonafide chore on your hands.
While it’s definitely manageable, we’re building these truck to the best of our ability, and that means seeking the highest caliber option in the market where we can.  When it came to power management, our search stopped at sPOD. 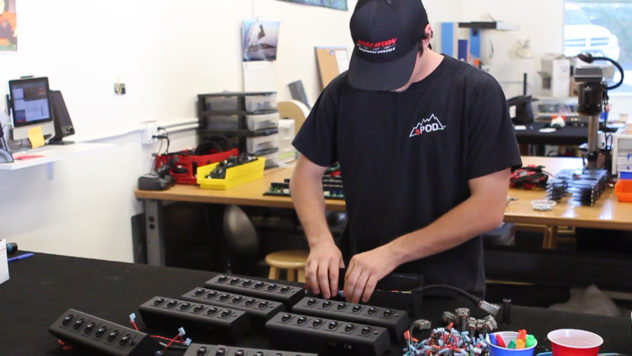 Made right here in the US of A

Their videos and website will give you all of the technical specification your heart desires.  What it boils down to is quite simple.  Remember that wiring harness we talked about earlier?  Grab it, and clip every wire but power and ground.  That’s it.  You run those two wires to the controller and sPOD does the rest.

The brains behind these units is the Source board, a self contained power management system that takes most of the frustration and work out of wiring.  We decided on their 8 circuit SE system, which is controlled by a ridiculous LCD touchscreen.  The interior overhaul is coming up soon on the 4Runner, and this slick system will be right at home in the updated digs. 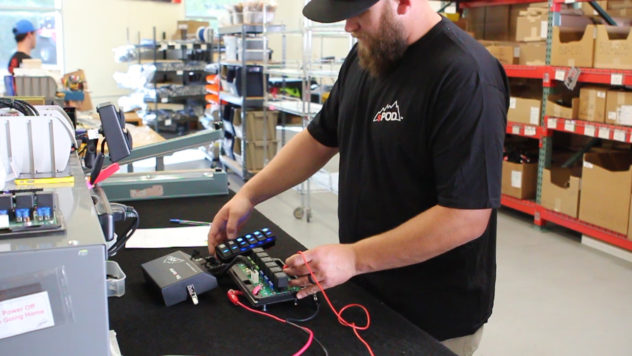 Installation couldn’t be simpler: mount, power, ground, install the switch.  The most trouble you’ll have this entire process is getting through your firewall and deciding where to mount it.
Once we were powered up and rolling, the results were immediate.  In place of 8 rocker switches, I have a customizable touch screen next to my shifter.  You can change the switch name, colors, function (flash, strobe, momentary, brightness adjust), and more.  And at the bottom of the screen is a dashboard telling you the unit’s temperature and current battery level. 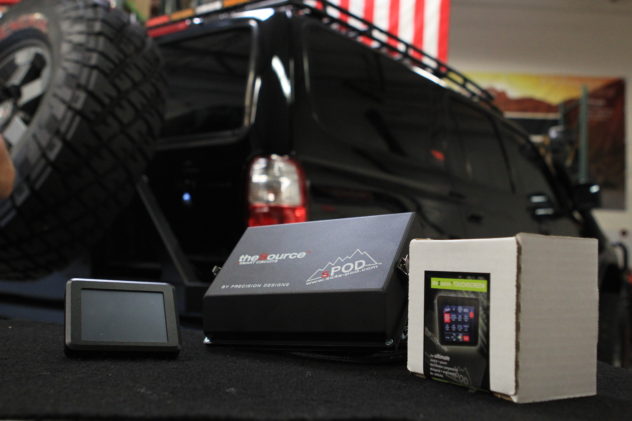 This was one of single coolest enhancements on the vehicles, and nearly fool-proof to boot.  Being local to southern California and entirely made in the USA, it makes the decision that much easier.  Cutting edge technology, quality assembly and components, and a family-run operation with deep roots in the very things we love.  If any of the above tickle your fancy, sPOD should already be on your Christmas list.

I wanted to give you the top-level information that I think is most helpful, but you can check out their other products and get all of the technical specifics you need over at www.4x4spod.com. 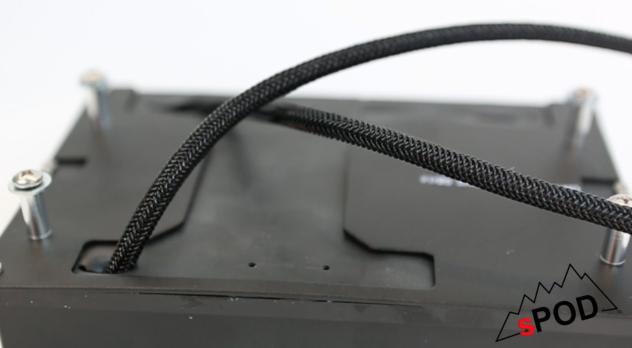 Underside of the unit 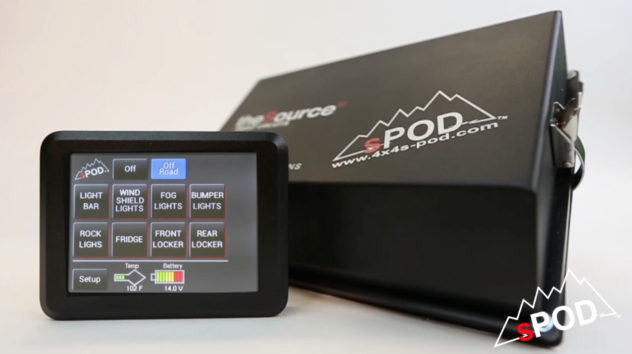 The sPOD SE, powering both builds 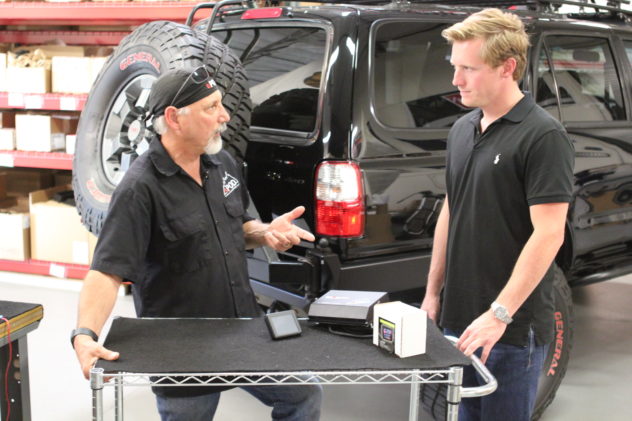 Getting the rundown from owner and creator himself, John Angelastro. 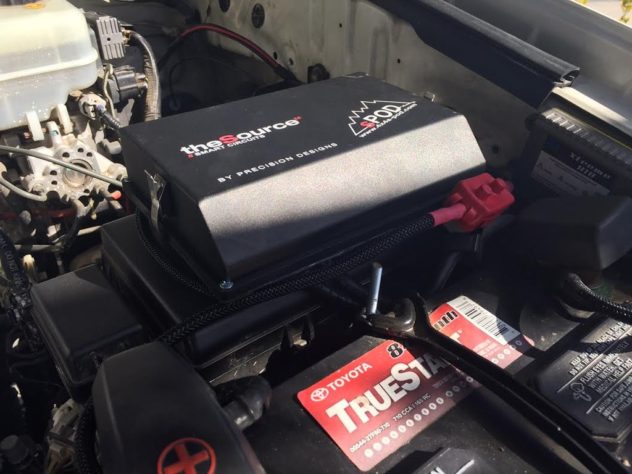 Mounting options are aplenty, especially in the spacious bay of the GX470. We chose the fuse box lid. 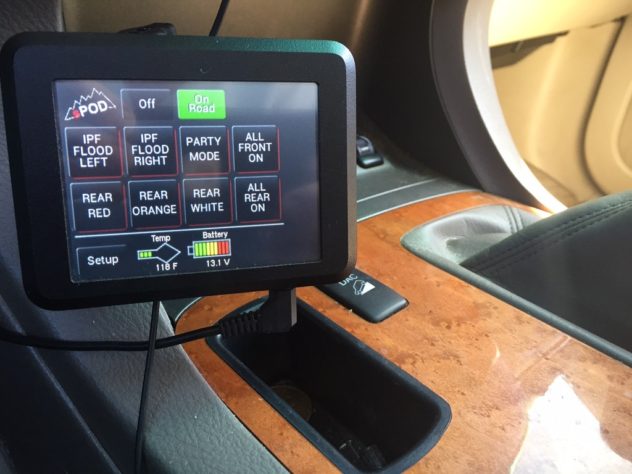